Would you give up meat for another protein source? What if that new food was mealworms? Professor Timothy Taylor discusses.

Meat, and especially beef, has a heavy environment footprint by the time you take into account the farm products and land needed to produce it. In particular, if one looks out at the emerging and not-yet-emerging markets across the global economy, and start calculating what kinds of farm output would be needed for a large share of the world to have the meat consumption of high-income countries, it’s hard to see how it would work. However, there are ongoing efforts to think about how one might increase world production of protein with a smaller environmental footprint.

For example, I’ve written before about “First Burger Grown from Stem Cells Served in London” (January 21, 2014). In “Tradeoffs of Cultured Meat Production” (May 16, 2016), I pointed to some studies suggesting that “carneries”–that is, factories that produce meat–could have a much smaller effect on land use and associated environmental costs than traditional meat production.

In a forthcoming issue of Global Food Security, Peter Alexander, Calum Brown, Almut Arneth, Clare Dias, John Finnigan, Dominic Moran, Mark D.A. Rounsevell ask the question: “Could consumption of insects, cultured meat or imitation meat reduce global agricultural land use?” A “corrected proofs” version article has been freely available online since April 22, 2017, but at some point when the article is published in the journal it will only be available through libraries and subscriptions. (The doi address will remain https://doi.org/10.1016/j.gfs.2017.04.001.)

Here’s an illustrative figure from the paper. The top panel shows calories per unit of agricultural land; the bottom panel shows protein per unit of agricultural land. On both measured, beef is the lowest producer on the far right-hand side. The most efficient producer in both cases is soybean curd, followed by mealworm larvae and adult crickets. Cultured meat is in the middle of the pack, not too different from eggs, poultry, and pork. 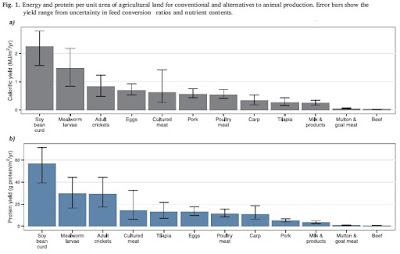 As the authors note (citations omitted): “The results here assume that insect feed uses the same mix of feeds currently used for conventional livestock. However, if half of food discarded by consumers could be used as feed for mealworms, this would replace 8.1% of current animal production.”

From a US perspective, mealworms and crickets may not sound like culturally acceptable alternatives. But there are lots of places around the world where demand for calories and protein is rising sharply, and where eating insects or worms is, if not always common, by no means taboo, either.

Perhaps more to the point, after a certain amount of processing, protein from mealworms or crickets may not look or taste all that different from the mystery meat that already shows up in a number of places. Nuggets are nuggets, right?

For more with Professor Taylor, check out “Unexpected Economics” or “America and the New Global Economy” Wondrium!

Apprenticeships for Early Childhood Education?Dig into the question of when to start preening children for a particular skill set with Professor Timothy Taylor. […]

Both Sides of the Vaping Controversy

Both Sides of the Vaping Controversy. Could vaping and e-cigarettes reduce the toll of death and illness due to smoking conventional cigarettes? The most recent issue of the Annual Review of Public Health has a nice pro-and-con. Professor Timothy Taylor discusses both sides of artificial cigarettes. Read more on Wondrium Daily. […]